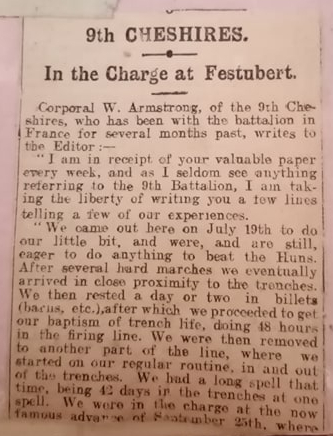 “I am in receipt of your valuable paper every week, and as I seldom see anything referring to the 9th Battalion, I am taking the liberty of writing you a few lines telling a few of our experiences.

We came out here on July 19th to do our little bit, and were, and are still, eager to do anything to bear the Huns. After several hard marches we eventually arrived in close proximity to the trenches. we then rested a day or two in billets (barns etc.), after which we proceeded to get our baptism of trench life, doing 48 hours in the firing line. We were then removed to another part of the line, where we started on our regular routine, in and out of the trenches. We had a long spell that time, being 42 days in the trenches at one spell. We were in the charge at the now famous advance of September 25th, where we suffered serious losses. I enclose a little impromptu poetry on that event.

We are very lonely at times, and I would like to ask your readers if they would kindly oblige by sending us an instrument of some description, either a melodeon or a concertina, or anything in the musical line, as we have several men who can manipulate either of the former and other instruments. We are having a very rough time now, as everywhere is flooded, and the mud in the trenches is up to the hips, and even the roads are flooded knee deep.”

The Charge of the 58th Brigade
at Festubert on September 25th, 1915

‘Twas on a cold September morn
When a gallant charge was made
Against those cowardly Prussians
By the 58th Brigade.

When the order came along the line
To charge the Hunnist den,
Across the trench we leapt and went,
Four thousand Kitchener’s men.

And on the ground between the lines,
The lads fought hard and true;
Brave deeds were done, fresh honours won,
By Wilts, Welsh, and Cheshires too.

The shrapnel hissed, the bullets spat,
The place resembled hell;
And many of our noble lads
Just murmured low and fell.

But the dead are not forgotten
By their comrades left behind,
For o’er their graves a cross we put,
The great immortal sign.

And may our great Protector
Take them to the Heavenly shore,
Where trials are all ended,
And sorrow is no more.

And when the order comes again
To charge those German curs,
By the name of God our maker,
Revenge will then be ours.