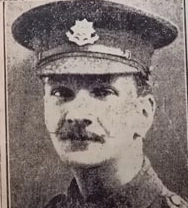 Mrs. Stephens, 12, Barton-street has received news from the front of the death from wounds of her husband, Lance-Corporal A. Stephens, on March 24th. Lance-Corporal Stephens joined the Cheshires at the beginning of the war, and went out as one of the stretcher-bearers last July.

One of his officers writes to Mrs. Stephens;

Corporal Stephens was one of the very best men I have had the honour to command. Brave, sober, smart, always so cheerful and willing. He was respected by every officer, N.C.O., and man in “D” Company.

Many a man has considered himself fortunate that his wounds were first attended to by the late Lance-Corporal Stephens, who took the greatest care of his injured comrades. I trust that the knowledge that he died for his country will help to soothe your great grief.

Lance Corporal Stephens leaves a widow and three young children. Before joining the army he was in the employ of Messrs. Walker and Co., wine and spirit merchants.

Finding further information on Lance-Corporal Stephens has proven difficult, mostly due to the issue of no first name being given in the above article, and some documents listing different initials for his first name. Having looked through the Cheshire Roll, the closest match would be Albert Edward Stephens, the only “A Stephens” (to my knowledge) in the regiment who was killed in action. He served as a Lance-Corporal in the Cheshire Regiment’s 10th Battalion and had the service number of 7714. This number has been useful when identifying Stephens in some documents that utilise a different initial for his first and middle names. I imagine this can be put down to issues of handwriting when digitising these documents.

Albert Edward Stephens is listed as having died of wounds on 17th July 1917, not 24th March as stated in the letter above. This date could of course be referring to the date on which Mrs. Stephens received the news of her husband’s death, and would not be the first time I’ve uncovered some discrepencies in this collection of newspaper cuttings.

Records show that Stephens suffered from a bout of Bronchitis in January of 1915, for which he received medical treatment, and was a recipient of the Military Medal in 1916. This medal was awarded to Other Ranks (N.C.O.s and Privates) for exceptional bravery. It was first introduced on 25 March, 1916.

The awarding of this medal could possibly relate to one of two injuries suffered by Stephens in 1916. Records detail that Stephens was reported on 10th October  as having received a “gunshot wound of the head,” suffering “contusion or simple flesh wound of the scalp.” Less detail is available regarding his second injury. Stephens was listed as “Wounded” on the War Office’s Casualty List on 13th November.

Both injuries were suffered when the 10th Battalion were involved in the Battle of the Somme in 1916.

Stephens would have been stationed in Belgium at the time of his death in 1917, as the 10th Battalion had recently been involved in the Battle of Messines, and were just 2 weeks away from the commencement of the 3rd Battle of Ypres, what is commonly referred to as Passchendaele.